Thailand’s Leap Towards a Digital Economy 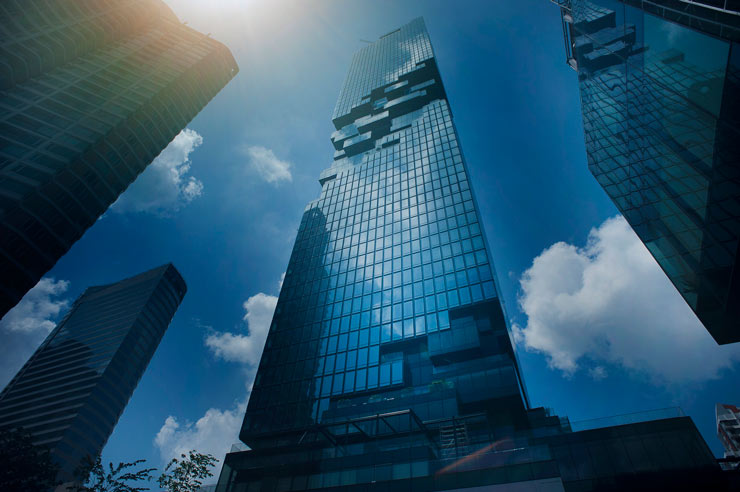 King Power MahaNakhon is a mixed-use skyscraper in the heart of a central business district of Bangkok and the tallest building of Thailand.

Digitalization Offers Great Opportunities to Thailand
Thailand’s economy has made impressive progress in social and economic development over the past four decades. It has become an upper middle-income country in less than a generation, with continuous strong growth and a broad reduction in poverty. Now, the next step for Thailand is to become a high income, knowledge-based economy and to achieve that Thailand has embarked on a new journey towards digital revolution. The role of digitalization has changed over the years from simply a driver of marginal efficiency, to the main source of disruption and innovation. Digitalization offers tremendous opportunities for Thailand, opening possibilities to improve social welfare, develop competitive products and services, and to transform many sectors in the economy. Digital technologies related to big data, blockchain, automation, connectivity and digital customer interfaces, encourage the creation of new business ventures and foster innovation.

Thailand’s Future Strategies Aligned to Elevate The Economy
The Government of Thailand has in the recent years adopted several reform strategies, one of the bigger ones being “Thailand 4.0”, which aims to lift Thailand out of the middle income trap through a shift from manufacturing to innovation. Alongside “Thailand 4.0”, “Digital Thailand” strategy sets out to transform Thailand into a country that maximizes the use of digital technologies in all socioeconomic activities to develop infrastructure, human capital, and other digital resources.

The long-term digital ambition is laid out in Thailand’s 20-year strategic plan for attaining developed country status through broad reforms. There has been progress on putting the digital vision into action with the implementation of “smart city” pilots in Phuket and Chiang Mai and, large ICT infrastructure improvements such as extending the coverage of broadband internet to all villages in the country. These are the first steps of a long digital journey for the country.

Thai Society Beginning to Embrace the Change
Consumers in Thailand have become more accepting of digitalization in the past couple of years, especially regarding purchasing behavior. E-commerce has been booming, with 57 million internet users in 2018, a 24% increase form last year, along with an e-commerce market valued at US$3.5 billion.
For a few years now, cashless society has been a hot topic in Thailand with the Ministry of Finance strongly supporting the move. In 2017, it distributed 550,000 electronic data capture terminals across the country and on top of that it launched PromptPay. PromptPay allows citizens to receive cashless payments from various government agencies. Additionally, they can send money to other users with just the recipient’s mobile number, or Citizen ID number.

Banks Investing into Online Services and Cryptocurrencies
As consumers rapidly accept digitalization and the government works to transform Thailand into a cashless society, banks in 2018 and beyond will continue to shift more products and services to online and mobile banking platforms to claim first-mover advantages, and a larger customer base.
Thai government has become increasingly outspoken and welcoming of cryptocurrency projects since the start of 2018. Thai regulators have made great progress, and Thailand has attracted foreign companies by providing clear and explicit guidelines for foreign blockchain companies to operate in. Many Thai banks now have their own cryptocurrencies and in August 2018, Bank of Thailand announced that it would be allowing local banks to set up subsidiaries for dealing with cryptocurrencies. The positive atmosphere surrounding blockchain in Thailand provides great opportunities for international blockchain companies.

Challenges and Opportunities in Thailand
According to officials in Thailand, this new road to innovation and a digital landscape would make Thailand the driver of digitalization in South-East Asia, and one fourth of country’s GDP would be created by the digital sector in a decade.
One of the challenges Thailand is facing regarding digitalization is human capital and digital literacy. Ineffective math and education curriculum and weak English proficiency have for long been the achilles heel of human capital development in Thailand. In order to be ready to adopt and benefit from the latest digital technologies it is vital that students and working professionals have up-to-date ICT skills.

Thailand’s Minister for Digital Economy and Society Pichet Durongkaveroj has long expressed keen interest in international companies with expertise in digitalization. International IT firms are presented with great opportunities in Thailand as the digitalization wave is in full effect, especially companies with solutions to the various digital problems Thailand is facing now and in the future.